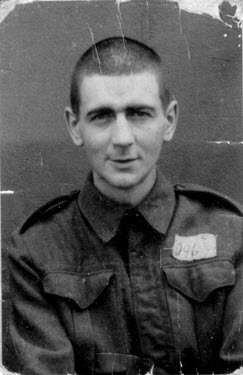 (Extract from an interview)

I was on the regimental ration truck from the 7 Dec until 19 Dec. The Japs landed; they made it across the half mile from the mainland to the island under a smoke screen. They'd set a bunch of oil tanks on the shore on fire and they were smoking and they got across that night.

Myself and Eddy Smelts from Elgin, we left Wan Chai gap with two truckÂ­loads of men and we went in with a guide to Jardine's Lookout. Unknown to us we went through the Japanese front line - they let us through. There was no action, no firing, might have been rumbles in the distance but there was nothing close. We got into Jardine's Lookout, so we hung around there all night sleeping and half asleep in the cabs, and the men were dispersed. Lt Beirkett was in charge of that party.

At daybreak they opened up on us from both sides. I set fire to my truck, we couldn't get them out and we didn't want them to have it. I took my gas mask, and I stuck it down the gas tank and got the harness saturated, then I threw it in the cab and got the truck going good. I had a Thompson sub-machine gun, I forget how many rounds I had, but not that many. I took that with me but I can't remember what happened to Smelts' truck. We hung around trying to get out all day, everybody on their own, didn't know where we were going and we hadn't a clue where they were. They were sniping at us and they were coming damn close too.

I remember crawling over a ledge and looking down (the reason I mention this is it was the only chance I got to shoot any of them), a bunch of Japs were sitting around cooking some rice over a fire and there was about 20 of them. I didn't have that many rounds in this submachine gun anyway and I just spewed them. I don't know whether I got any or whether I didn't, but anyway I took off at the high port.

About 6 or 7 o'clock that afternoon we couldn't possibly get out. We came across this shack up in the hills. It was something to do with the army, but I can't remember now. We went into this place and there was quite a few more Canadians in there. We decided to stay there. It seemed to me we stayed there that night, but I can't remember exactly. There would be about 50 guys. Lt Mitchel was there and Smelts, the other driver. An hour or so after we got in there the Japs came through - they were just like ants. They surrounded the place and this officer came in and pulled us all out. Everybody out. They lined us up on the road, there was quite a grade on the road. They made us all kneel down then they started sticking guys with bayonets. I was in the front and there was Jacky Albert on one side of me and Deslauriers on the other. They stuck them with bayonets and everything. I looked down and the actual blood was running down the road between my knees. They never touched me; I don't know why. Jacky Albert, he's alive, he got stuck just above his kidney, I guess. And Delorme, they cut him down his head here, his scalp just fell over, of course they killed him.*** And there wasn't many of us got out of that. And then, the ones that were able to walk around after that they were going to shoot us - so they lined us up in front of a firing squad. We figured we'd had it, there was no way that we would get out of this, they'd killed so many now, they wouldn't save us. This Jap officer, I didn't know he was an officer at the time, I never saw a Jap soldier in my life, but anyway he had one of this samurai swords. He let a roar out of him and these guys dropped their rifles and that was it - they wired us up together. They took us back into the shack and stood guard on us all night.

***The name "Delorme" is probably not correct as both 'C' Force members with this name survived the battle. (ed) 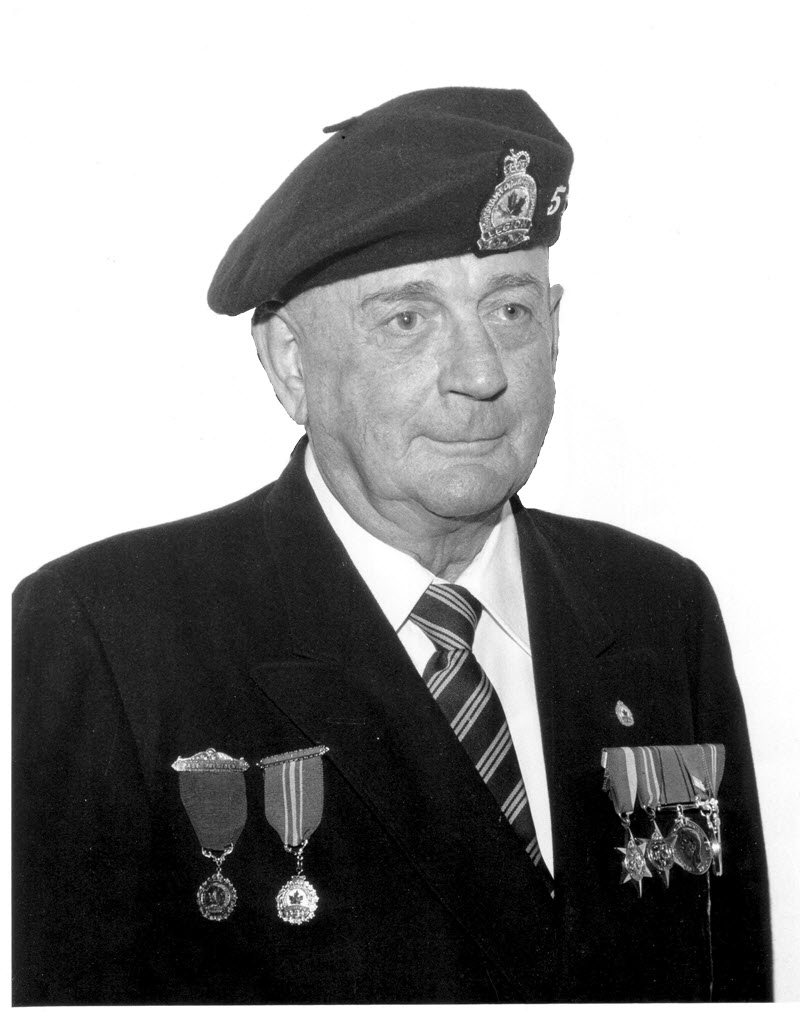 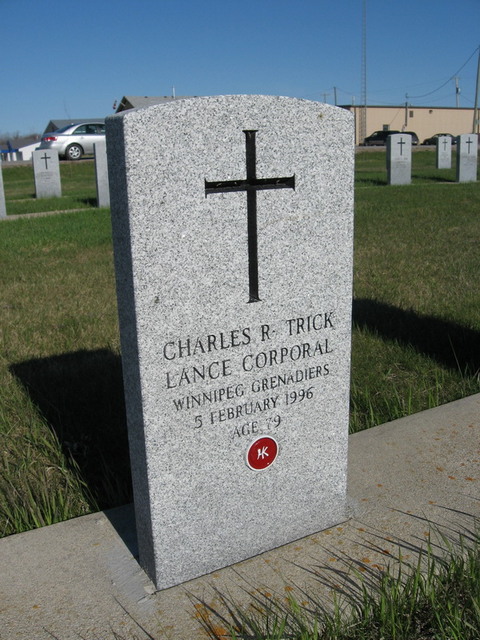 Passed away peacefully, surrounded by his loving family, Charles Richard Trick in his 80th year of life at 7:00 a.m.,Monday, February 5, 1996 at Stonewall and District Health Centre.

Dick is survived by his devoted wife, Helen (Sheldon) to whom he was married for more than 54 years. He is also survived by their three children, James Richard and his wife Anne, John Charles, and Margaret Ann Sullivan, her husband Bob and their children, Leah and Robby. Dick is also survived by his youngest brother Gordon Trick (Ella), Violet Trick, John Sheldon, Art Sheldon (Glenn), Doris Spurr (Ewart), Stan Sheldon (Maureen) and many nieces and nephews. He was predeceased by his parents, Ethel and Charles Staples Trick; brother Douglas and sister Lillian.

Dick lived on a farm in the Stonewall area since the age of eight. He was raised and educated at Stonewall Schools and then joined the Winnipeg Grenadiers in 1939. He was dispatched to Hong Kong in 1941 where he fought and was captured in December. Repatriated after a grueling and extended four-year internment in several Japanese prisoner-of-war camps, he returned to the Stonewall area and took over the family farm.

In the post-war period Dick operated a registered herd of holsteins and assisted in the founding of the Cooperative store in Stonewall. He was an active member of his community in various farm organizations and a faithful member of Stonewall Branch No. 52 of the Royal Canadian Legion. During his service he held various offices including more than 25 years as Branch Service Officer. He received the Meritorius Service Medal from Dominion Command in 1972 and was proud to have been made a life member of the Legion in 1981.

Recently Dick was heard to comment that he took great pride in his more than 56 years of faithful service with the federal government.

Cremation has taken place and no service will be held. Friends wishing to call are welcome at the home of Margaret and Bob Sullivan, 19 Bonnie Cres, Stonewall at 2:00 p.m. on February 8.

In lieu of flowers, donations may be made to the Salvation Army or the Stonewall and District Health Centre "Funds for the Future".

MacKenzie Funeral Home, Stonewall in care of the arrangements.

You can hear an interview conducted by the Museum of Man and Nature (now The Manitoba Museum) by visiting the HKVCA site and checking out the Audio/Video Interviews section on the Submissions page.