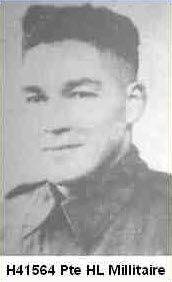 Hank was predeceased by his parents Roger and Celina Millitaire; his daughter, Marlene; his brothers, Lewis and Amos and his sisters, Elizabeth Proulx and Carrie McIvor. He is survived by his sister, Florence (Bobbie) Militaire; sons, Maurice and Blaine and daughters, Brenda and Denise all of Winnipeg, and daughter Doreen of Edmonton.

Hank was born on August 5th, 1914 in Carman, Manitoba. He served in the Winnipeg Grenadiers during the Second World War and was taken prisoner in Hong Kong for the duration of the war. Following his return, he worked with Huxley Cartage and a variety of trucking companies in Winnipeg. Hank spent some time in Calgary and returned to Winnipeg to retire.

A public viewing will be held at Bardal Funeral Home, 843 Sherbrooke ST., Winnipeg, Manitoba on Tuesday, October 5th at 7:30 p.m. with prayers to follow at 9:00 p.m.

Memorial donations may be made to the Deer Lodge Centre, 2109 Portage Avenue, Winnipeg Manitoba. Doyles Funeral Home of Carman in care of arrangements.