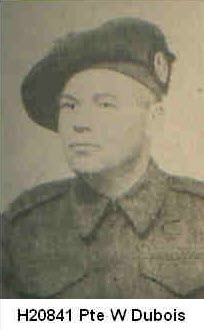 Mr. Dubois was born in the St. Claude district on March 22, 1903, where he lived most of his life. He spent a few years in Saskatchewan and after his return, married Miss Florence Gertrude Warren, of Cloan, Sask., on April 30, 1937. On July 16th, 1941 he joined the Queen's Own Cameron Highlanders and after a short time of service with that regiment he was transferred to the Winnipeg Grenadiers, and was sent to Hong Kong in October, 1941.

He was taken prisoner at the fall of Hong Kong. After his freedom from prison camp in 1945 he returned to St. Claude where he has lived ever since. His health had been failing and had spent quite some time in Deer Lodge Hospital.

CARD OF THANKS We wish to express our most sincere thanks and appreciation to all the kind friends who showed sympathy, contributed floral offerings and all who assisted in any way during our recent bereavement. -The Dubois Family

Translation of Paragraph relating to Wilbert Dubois from Anecdotes 1954

On the 28th of April, Mr. Wilbur (sp) Dubois died at the age of 51 years at the Deer Lodge Hospital in Winnipeg. He was born in St. Claude in 1903 and had gone to Hong Kong where he was held prisoner by the Japanese. That he was able to pass through this ordeal was due to the grace of his mother who had shown him how to mend socks. When some of the Japanese soldiers noticed his talents, they kept him busy darning their socks. This enabled him to have an easier life than most of his companions. He returned to St. Claude in 1945 but he remained feeble and sick as a result of the bad treatment he had received in prison.