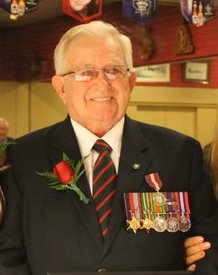 With heavy hearts, we announce the passing of Douglas Rees on Monday, March 18, 2019 at the age of 98 years.

Doug was born in St. Johnâs, NL and at age 19 he joined the Royal Rifles of Canada (C Force) with whom he was deployed to Hong Kong during World War II. He was a Japanese P.O.W. for a very difficult four years. He rarely spoke of these times. Doug placed a very high value on freedom, democracy and human rights.

After returning to Canada he settled in Ontario and worked for Canada Post. In 1992, Doug and his wife, Carolynne, followed family and moved to Calgary. He was a devoted husband, father, grandfather, and uncle, taking great pleasure and pride in his family.

For many years, Doug and Carolynne spent winters in Barbados where they enjoyed friends and watching beautiful sunsets from their balcony. In the summer, the two enjoyed boating and fishing in the Kawarthas. Doug loved music and playing the organ. He was also an avid sports fan, cheering for the Toronto Maple Leafs and Blue Jays every game they played. He always had a twinkle in his eye, a kick in his step and a positive outlook on life. He adored returning to Newfoundland to visit his brother, sister and the rest of his family. Doug enjoyed good health and independence until his final days.

Doug is survived and cherished by his daughter and son-in-law, Cheryl and Sid Viner; his grandchildren, Rebecca, Benny and Eliana; as well as his nieces and nephews. He was predeceased by his loving wife Carolynne, his brother Lloyd Rees, sister Della Forward, brother-in-law Robert Forward, and brothers, Charles Whalen and Angus Rees.

A Private Family Service will be held. Condolences may be forwarded through www.mcinnisandholloway.com.

The family wishes to express their appreciation to doctors: Walker, Saar, Desy, Groshaus, Simon, Biala and Tanner â nurses: Savannah, Kim, Kimberley, Dennis, Lilia and Laura â and all the staff on Unit 71 and Unit 93 at Rockyview General Hospital. We also want to thank Dr. Brent Kinnie who provided exemplary care over many years and the staff at Mackenzie Towne retirement residence.