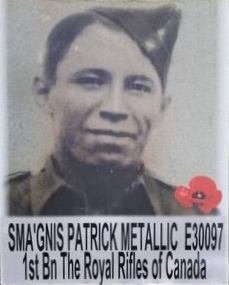 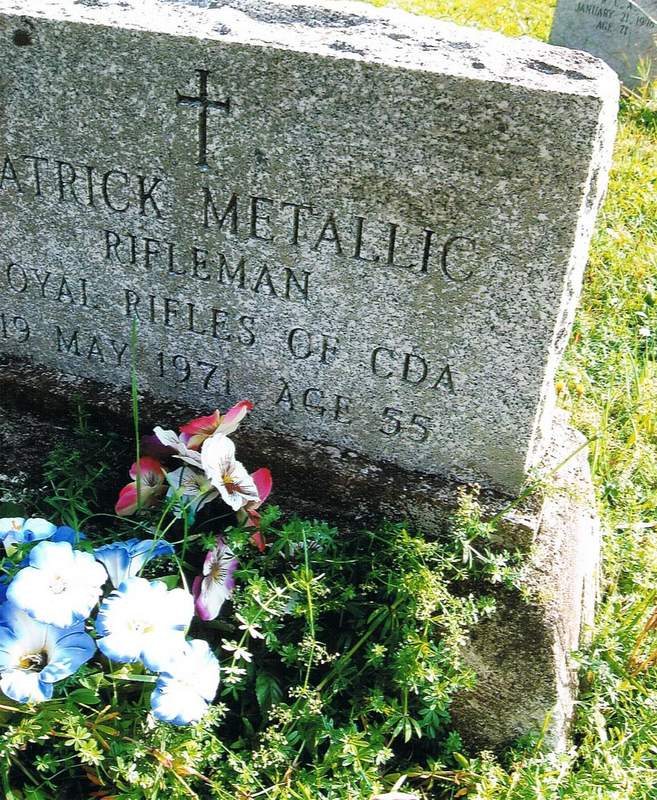 From CBC.ca Nov 2019 - Life was not easy for Patrick Metallic, a Mi'kmaq veteran from Listuguj, Que., when he returned home from the Second World War.

As a part of the Royal Rifles of Canada, a rifle regiment in the Canadian Army out of Quebec City, Metallic was one of 1,975 troops in Canada who fought in the Defence of Hong Kong and spent nearly four years as a prisoner of war.

Hong Kong was the first place Canadians fought a land battle in the Second World War. In November 1941, troops from Winnipeg and Quebec City were sent to reinforce the British colony.

On Dec. 8, Japanese forces invaded and overran Hong Kong's defences in 17 days, killing 290 Canadians. Metallic was captured on Christmas Day and spent time in three different POW camps in Hong Kong including Sham Shui Po Camp before being sent to Japan on Jan. 19, 1943, where he was imprisoned in foul conditions and endured brutal treatment.

"He was severely beaten," said his grandson Patrick Denny Isaac.

"He was beaten so bad that he swallowed his fake teeth and they had to surgically remove them from his chest."

During one of the camps, he was slave labour on ships.

The POWs were liberated in August 1945 after the atomic bombing of Hiroshima and Nagasaki forced Japan's surrender and ended the war in the Pacific.

When Metallic returned home to Listuguj, he was a different person. The undiagnosed post-traumatic stress from his experience caused struggles with alcoholism and violence. He died at the age of 55 on May 19, 1971.

Patricia Metallic-Gray, 80, is one of Metallic's nine children. She describes her childhood as a troubling time when her father returned home.

"It was not very nice. My father had flashbacks all the time. He thought he was still in the war." said Metallic-Gray.

"That went on for years and years. I hated him because I never understood."

In 2010, Metallic-Gray travelled to Hong Kong to learn about what her father experienced as a POW. She said after her trip, she went to the graveyard in Listuguj to apologize to him.

"It lifted a big load off my back," she said.

"I finally understood after why he did the things he did, and nobody was around to help him."

Nov. 8 marks National Aboriginal Veterans Day, which was first observed in Winnipeg in 1994 as a way to separately honour Indigenous contributions to Canada's military service.

And every year on Remembrance Day, the Listuguj Veterans Memorial Committee organizes a mass, ceremony, and feast to honour the community's veterans.

"It's a big deal for our family. Every year since I was a little kid, we always honoured our grandfather," said Patrick Denny Isaac, who also volunteers with the committee.

"Every year we honour that sacrifice and what he's been through. "

Mary Bradstreet Metallic is another volunteer on the committee. She said Metallic's story is one the community cannot forget. According to Veterans Affairs Canada, at least 3,000 First Nations members enlisted in the Armed Forces during the Second World War, and that included several men from Listuguj.

"We have a large, long history of veterans in our community. It's important so that we don't forget," she said.