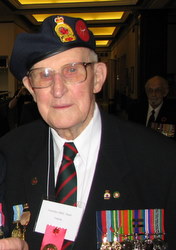 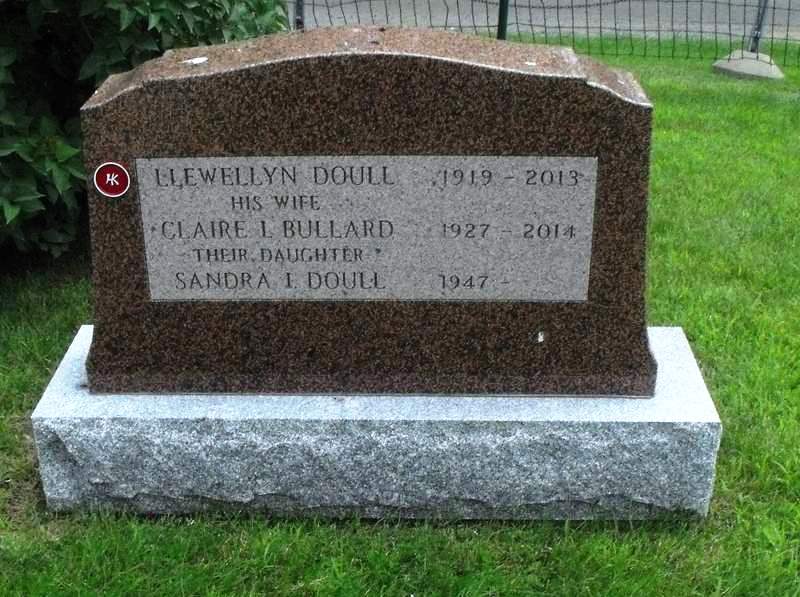 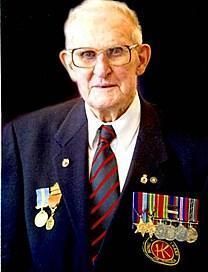 November 25, 1919 - April 10, 2013 It is with great sadness we announce the passing of Llewellyn (Bill) Thomas Sidney Doull. He passed away peacefully at 93 years of age on April 10, 2013 at home with his wife of 67 years, Claire, and family present. Bill was born on November 25, 1919 in Moncton, New Brunswick to Lewellyn Edward and Mary Ethel Doull. His family moved to Drummondville, Quebec at an early age where he grew up with his 4 sisters and 2 brothers. As a child he inherited the name Bill which stuck with him for the rest of his life. Bill started working at Canadian Celanese Ltd. when he was 16. At the outbreak of WWII, he and his older brother Lloyd enlisted with the Royal Rifles of Canada. As what became known as "C" Force, the Royal Rifles and the Winnipeg Grenadiers were sent to reinforce the British enclave in Hong Kong on October 25, 1941. Vastly outnumbered, the Allied Forces fought valiantly for 17 1/2 days during the Battle of Hong Kong and Bill was taken prisoner by the Japanese on Christmas Day, 1941. He spent the next 44 months as a Prisoner of War in Hong Kong and Japan where slave labour, starvation, disease and mistreatment were the norm. The members of "C" Force were the first Canadians in battle in WWII and the survivors of the battle and the POW camps were the last ones to come home. After the war, Bill returned to Drummondville where he convalesced and continued to work at the Celanese. Then he met the love of his life, Claire Bullard. They were married on April 6, 1946 and celebrated their 67th wedding anniversary 4 days before Bill's passing. Bill and Claire started their own family and raised 3 children, Sandra, Norman and Murray. Bill was a proficient handyman, a hard worker and could fix almost anything in need of repair. Bill retired in 1976 after 41 years of service at the Celanese. He and Claire then moved to their cottage on the shores of Lovering Lake in Quebec. Bill loved to boat and fish on the lake in the summer. During the winter months he built a hut on the lake where he spent many hours ice fishing. He loved all the animals and fed the birds and chipmunks. He took great pleasure feeding the squirrels from his hands. In 1997 Bill and Claire sold their cottage and moved to Sardis, BC where he lived until his passing. During their retirement, Bill and Claire travelled extensively throughout Canada and the US in their camperized Volkswagen van. Bill continued to attend reunions with his HK comrades. He was also a member of the Royal Canadian Legion for 67 years. In June, 2012, Bill was awarded the Queen's Diamond Jubilee Medal in recognition of his contributions to his country and community. Sandra accompanied her father to numerous medical appointments with doctors and specialists and to hospitals for tests prior to his decision to have surgery. When her father returned home from the hospital, she tirelessly stayed by his side, day and night, caring for him to make him as comfortable as possible. Claire spent countless hours at his bedside, comforting him and reminiscing about the good times in their lives. The family would like to convey special thanks to Dr. Jennifer Wilson for her attention to Bill in his last days and the family is also very grateful to the Home Care nurses and the Home Support workers. Bill is lovingly remembered by his wife, Claire Irene Doull, his children, Sandra, Norman and Murray (Lucy), his sister Helen Knowles as well as his grandchildren Joy Sutherland, Tanya Pennington (Layne), Roderick Doull, Cora Pilon (Chris) and his great grandchildren, Becky, Michael and Adam Sutherland, Gray Pennington and Kyle and Brandon Pilon along with many nephews and nieces, comrades and friends. Bill is sadly predeceased by both his parents, sisters Zaida, Jenny and Frances and by his brothers Lloyd and Leonard. Bill did not wish for a funeral service and wanted his remains cremated. His ashes will be interned at the family cemetery in Cherry River, Quebec in due course. A Celebration of Life will take place at a date and location which is yet to be determined by the family. In lieu of flowers, the family is requesting that donations may be made in loving memory of Llewellyn Thomas Sidney Doull to: Hong Kong Veterans Commemorative Association, PO Box 381, Winnipeg, MB R3C 2H6. Please indicate that your donation is to support the Hong Kong Veterans Memorial Wall. Alternatively, donations can be made to the Chilliwack Ostemy Association.

'C' Force soldiers who died overseas are memorialized in the Second World War Book of Remembrance and the Canadian Virtual War Memorial, both sponsored by Veterans Affairs Canada. Please use the search utility at VAC to assist you.