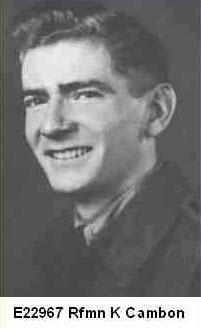 Via the U.S.S. OZARK

Read more details of the trip home in Ken's account.

CAMBON Kenneth George M.D., C.M. Professor Emeritus, University of British Columbia After a brave seven-year struggle with dementia and ill health, Kenneth George Cambon died peacefully surrounded by his family on February 25th, 2007 at 11:45 am. Ken was born in Quebec City on July 29th, 1923, the son of George and Lucy (Duffield) Cambon. After graduating from Commissioner's High School in 1939, Ken joined the Royal Rifles of Canada, ostensibly to flee his job at a soda fountain where two broken coffee carafes were about to cost him a week's wages. His training as a private in the army was spent in Valcartier, Quebec, in Sussex, New Brunswick and in Gander, Newfoundland. Towards the end of the 1941, having been initially trained to fight on the snowy slopes of Finland, the Royal Rifles were sent to semi-tropical Hong Kong to defend the then British colony. Ken and his fellow soldiers endured fierce fighting against Japanese troops during the battle of Hong Kong until the Canadian, British and Hong Kong Volunteer(s) regiments were forced to surrender. Ken was taken prisoner by the Imperial Japanese Army on Christmas Day, 1941 and suffered much hardship for the next 44 months as a prisoner of war in Hong Kong and in Niigata, Japan. In 1990, after revisiting Japan for the first time, Ken published "Guest of Hirohito", a memoir about his wartime experience that chronicled the brutal treatment of POWs, but also revealed Ken's compassion, his dry humour, his determination to survive and, in the end, a generous capacity for forgiveness. After the war, Ken was able to attend McGill University with the help of the Department of Veteran Affairs and was accepted into McGill's medical school in 1947. Here his eyes caught those of Eileen Sinclair Nason, who became his wife and best friend in 1949, a marriage that spanned over 56 years. In 1951 they were the first couple to marry while medical students and to graduate together. Ken wrote in his book that "it is to Eileen that I owe whatever success I have attained." Ken's and Eileen's first job as physicians was to work as medical officers for Alcan at the Demerara Bauxite Company in British Guiana (Guyana), where they worked for two years. Following a year's postgraduate training in England, Ken and Eileen completed their specialty training at the University of Texas in Galveston. In 1958, Ken and Eileen moved to Vancouver and established practices in their respective fields, otolaryngology and ophthalmology. Ken was particularly active in the Diagnostic Clinic at Children's Hospital where he supervised two clinics a week on his own time for children with hearing problems. He was a popular teacher in the Ear, Nose and Throat Department, and Ken's patients appreciated him not only for his skill as an ENT doctor, but for his kindness and willingness to listen as well. An avid winemaker, Ken and Eileen bought land on the Sunshine Coast in 1965 where Ken began growing his own grapes. His wine became known far and wide if not for its delicate palate then certainly for the terrific headaches that followed a night's revelry. Ken spent as much time as he could on the property he called "La Querencia" and loved gathering with friends and neighbours at the sauna on the beach, where debates about all the problems of the world carried on long into the night, punctuated by dips in the sea. Another of Ken's greatest pleasures in life was learning to play tennis, which he took up at the age 50. In keeping with his boundless enthusiasm for all new projects, Ken never gave up, albeit without success, in trying to convince the rest of his family to join him on the courts. Ken led a full life, blessed with family, good friends, adoring dogs, countless journeys and an irrepressible sense of fun. It was, above all, a life driven by the hope and promise of each new day. We like to think that Ken is up there somewhere, with his dogs by his side, drinking wine with the many treasured friends who predeceased him. Ken's passing is mourned by his loving wife, Dr. Eileen Cambon, daughters Noreen Cambon and Marie (Randy) Cambon, granddaughter Sybrand (Jim) Kamermans, and grandson Harrison Kamermans. Ken is survived by his sisters Margery (Bunny) Quail, Noreen Isabel Cambon and brother Austen Cambon as well as by many beloved friends. The family wishes to thank Ken's doctors, Dr. Steve Roberts, Dr. Richard Thomas, Dr. Gayatri M. Sreenivasan, and Dr. Kenneth Madden. The family also wants to extend a special thanks to Ken's caregivers: Sandra, Marcial, Janice, Myra and in particular, Ken's primary caregiver and friend, Kenneth Paul Schonberger, who cared for Ken from January, 2004 to the end. Thanks as well to the nurses and staff at South Granville Park Lodge where Ken spent the last 11 months of his life. The family would also like to thank all their friends who gave so much of their love and support during Ken's illness. In lieu of flowers, please make a contribution to a children's charity of your choice. No funeral by Ken's request of many years. Published in the Vancouver Sun from 3/3/2007 - 3/5/2007.

"Guest of Hirohito" by Ken Cambon